Close
for stories, poems, events and more
You are here: Home / Blog / The Bird Guide at the Threshold ~ What does it mean to be a Vision Quest Guide?

His little body flailed around in my hand, and sometimes was still. I had no idea how this creature came to be in his final throws but it was clear to me that he most definitely was.

I was on the phone with someone who was going to quest with me. My neighbour, and friend, called to me with an urgency in his voice, so I excused myself briefly to the woman on the phone and went out to the courtyard. There he was, his tiny chaffinch body writhing around on the cobbles. After some exchange about what might be going on I scooped up the body and took him in and back to the call (my neighbour was about to go out so couldn’t take on this role).

As the woman on the phone was going deeper into sharing her journey I watched in awe as this tiny being stretched out his wings one final time – so majestic, so full of grace. Then they came in and his head went down and in. Everything came in. And stopped. His life stopped.

It was one of the most beautiful things I have ever had the privilege to witness. My heart was blown open and I felt full of grief for the loss of this life yet in a place of gratitude for having been present to this ones passing from life to death. So thin is the veil between the two!

Now, as a vision quest guide I can find bigger meaning to all of this. I will, then, retell this story from a mythological perspective:

Let’s start with my neighbour – A friend and comrade on the path who sees my gifts as a Threshold Midwife (vision quests always have a threshold to cross over from this known world and into the unknown, underworld of ceremony) comes to find me to show me the bird (a chaffinch) who is clearly moving from this world to the next. The bird is moving towards the threshold. It is clearly his time. I am the one who is to take the bird and support him through this transition.

The neighbour friend meanwhile is having his own meta view of the whole experience which is also to do with death but this is for him and not for me to tell here.

At the same time, I’m then on the phone with a woman who is going to cross a threshold in a couple of months as part of the quest. She, then, is participating in her own dying, as a metaphorical journey towards a great undoing of the soul in order that she can die fully to what she has been thus far in her life, and so that she can come back to this world afresh, to begin living a new version of herself that is potentially more authentic and more aligned to her soul purpose than she can possibly perceive now.

Then there’s me, the guide. The one who guides people to the threshold, supports them to let go of what they know, to die to what they are ready to die to. And that was happening right there. In my hand, with this woman and with my neighbour, who on some level I was also supporting in the same way.

I don’t know what the deeper meaning of this is yet but I do know that the significance of it for the 3 people involved will belong to us (and Spirit) for as long as we are on this earth, and probably beyond. As for the chaffinch, well, he was not alone in his dying, that’s for sure. He was cared for, loved and deeply honored.

This is the gift I came away with:

It is with this much reverence that I wish to support each person when they are questing with me. This much care, presence and compassion. I don’t know what else I would wish to pledge to as I write this but if I can carry myself through this life with the same amount of humility and grace that that chaffinch did in his dying then I will consider it a life well lived. And if I can be with each individual in their metaphorical dying with the same presence and care as I was able to conjure for that precious being then I will consider it a gift worth sharing. If I can be a threshold midwife to people who are ready to die to a life that is no longer serving them then I will do that in the best way I can. What else would I choose to do with the gift that’s been entrusted to me? How else would I choose to be a guide?

And so, I will ask the spirit of this chaffinch to be my guide now as I work with people at the threshold. I offer this writing as a prayer for the chaffinch in my hands, for the privilege of witnessing him, and people, cross the threshold into the unknown and for the honor of guiding them through a metaphorical dying so that their living, and mine, can be the one that Life wants of us. 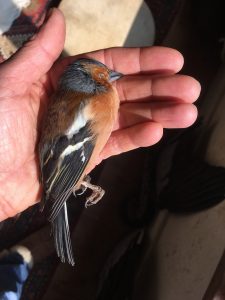